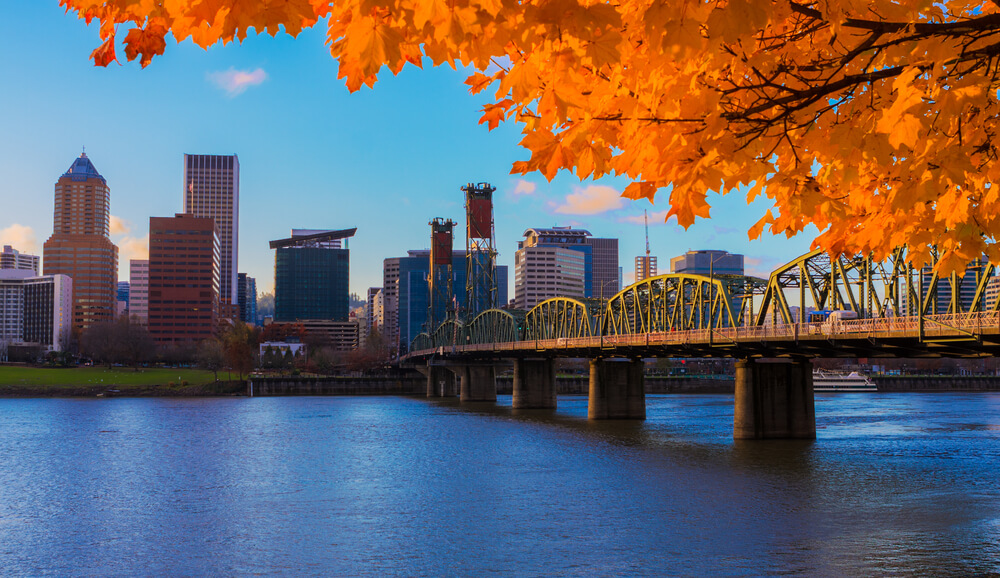 Portland offers top-notch food and drink, scenic outdoor activities and lots of chances to volunteer among many other draws to those considering retiring in Portland. This beautiful northwestern city lies near the Pacific Ocean and the Cascade Mountains. Learn more about Portland and why a growing number of retirees love calling it home!

Portland at a Glance

The scenic northwestern city lies near the Pacific Ocean and Cascade Mountains where the Willamette and Columbus rivers meet. Despite a population of about 2.25 million, the city offers many appealing aspects.

Portland boasts a public transportation system that includes 52 miles of light-rail track and 84 stations. Bike paths run for 319 miles leading nearly 20,000 people to pedal to work. With the city creating an “urban growth boundary” in the 1970s, Portland reduced sprawl and increased its walkability. The average drive to any place in Portland takes 20 minutes or less.

Known as “The City of Roses” the temperate climate with highs in the 80s and lows in the high 30s makes the area ideal for gardening, especially roses. Additionally, the city averages 37.5 inches of rainfall annually and 155 rainy days.

Portland’s restaurant and bar scenes have gotten showered with accolades by national food critics from The Food Network to Travel and Leisure to the Washington Post. Portland restaurants and its more than 70 microbreweries consistently rank among the best places to eat and drink in America and around the globe.

Additionally, national media, such as CNN and U.S. News & World Report, have recognized Portland as the world’s best city for food from street vendors. Portland has more than 600 licensed food carts, which allow residents and visitors alike to sample cuisines from around the world.

As if that’s not enough, Portland also features micro-roasters and cafes honored for their specialty blends that please every coffee lover.

Few cities match the natural beauty found around Portland. The 5,100-acre Forest Park, one of the country’s largest urban forest reserves, lies near downtown. It features about 70 miles of trails with scenic views overlooking the Williamette River.

About 10 miles northwest of downtown Portland sits Sauvie Island, one of the largest river islands in the United States. Its flat topography and lengthy roads make it ideal for cycling.

Additionally, Mount Hood and the Columbia Gorge, which features more than 90 waterfalls, exist a short drive from Portland and offer a plethora of activities, such as sightseeing, hiking, wind surfing and more.

Retiring in Portland doesn’t mean becoming a professional couch potato. Thousands of meaningful and rewarding volunteer possibilities exist. At last count, Portland had more than 3,400 registered charities, according to the Nonprofit Association of Oregon. The Corporation for National and Community Service reported Portland ranked No. 6 among 51 of the nation’s largest cities in its volunteerism rate at 33 percent. Continue to contribute to your community — get off the couch and volunteer!

Things to Do After Retiring in Portland

The 64-acre Oregon Zoo annually receives up to $5 million from a nonprofit organization to help support advances in conservation and education. The zoo features animals from around the world, plus galleries, exhibits, classes and camps.

Portland’5 Center for the Arts

Every year, Portland’5 Center for the Arts brings more than a thousand music, theatre, dance and lecture performances to Portland. Its five venues make it the fifth largest performing arts center in the country.

Portland’s parks and recreation department provides retirees many recreational, educational, and wellness activities that promote healthy living. The city’s 144 parks cover 11,712 acres with nearly 8,000 acres remaining undeveloped and in their natural state. Explore all the city offers on Facebook!

You Worked Hard All Your Life, Now Enjoy Retirement!

Great food and drink, scenic outdoor activities and plenty of volunteer options make Portland a city that retirees love to call home! When you’re ready for retiring in Portland, hire the Master Movers team of professionals to move you here. Call us today to learn more!